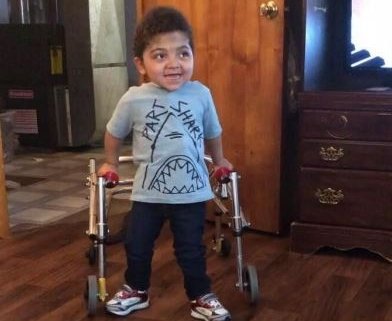 Sir’Savion was born 8-6-15. My pregnancy seemed fairly normal, until my 36 week ultrasound which showed fluid around my baby’s heart. I had to go see a pediatric cardiologist who decided that 2 days later I was having my son via c-section. Upon being born he was in a lot of distress. Luckily there was a geneticist in the room who coincidentally had read an article about GACI just a few weeks prior. When my placenta came out hard as a rock she had a good hunch at what caused it and started contacting other doctors to get her hands on Etidronate.

My son struggled after birth. His heart function was extremely poor, he wasn’t breathing well and had to be intubated, and his blood pressure was through the roof. Upon his first echo they didn’t really notice anything. But after a few hours of trying different medications and nothing was working they took him back for a 2nd echo. And that is when they found calcifications in his heart. They took him for a full body scan and he lit up like a Christmas tree. His little body was riddled with calcifications which confirmed the geneticist’s assumption even more ( though only blood testing could 100% confirm it). Being given the most devastating news and being told to have your family come up to see him because they didn’t know what the outcome was going to be for sure, but it doesn’t look good, is something I wouldn’t wish upon anybody in the world. Luckily they were able to get the Etidronate (the closest place that had it was in Indiana and we lived in Cleveland, OH). Being able to start the meds within his first 24 hours of life help him greatly. Over the course of the next month he worked his little self healthy enough to come home.

The next few months were spent in and out of the hospital with each stay lasting a little longer than the previous- with reasons from a bulging fontanelle, to feeding issues, to failure to thrive. After a few months I kept complaining to his doctor that I felt like I was going to break him every time I tried to move him or pick him up… At one point he was constantly crying and we couldn’t figure out what was causing it. By May we finally found the rib fractures. By June we were in the hospital because he started having issues breathing., needing oxygen supplements. By July he had diastolic dysfunction ( heart failure). All the while we were still trying to figure out why he was having such a difficult time breathing.

Tests from a lung biopsy to a blood transfusion- nothing was giving us the answer. We spent his 1st birthday in the hospital. We decorated a little room and had a few family members to come up and celebrate with us. After Sir turned one we hoped things would start to turn the corner for us. But his breathing kept getting worse, and his little body was so weak from a form of rickets caused by the etidronate that he had holes in the back of his skull leaving fluid filled bubbles. He lost all of his abilities; he could no longer even hold his head up.

By November I told them they needed to stop the Etidronate, that I didn’t think his body could take it anymore. After much discussion they decided to stop the med and give his body the chance to heal. This month was especially hard for us. Sir’Savion ended up receiving CPR 6 different times, one of those times lasted 20 minutes to get him back during which he suffered a stroke. By the end of November, his breathing was so poor that they said he was going to need a tracheostomy or he was going to die, nothing else was working. The next few months he spent in the hospital with a trach on a ventilator- letting his lungs get stronger, letting his body heal and get stronger. We thought we finally hit that home stretch of no worries.

Then in May getting a routine eye exam, they found some swelling in the nerve in his eye, which lead to finding the pressure on his brain, and then discovering that he has complex craniosynostosis. Not one but all of his sutures closed prematurely. So he went from one extreme end of having holes in his skull to the other end of it closing all together and growing thicker than an adults. So you guessed it. Another major surgery. He had a 11.5 hour cranial vault remodel, they split his head open from ear to ear to give his brain room to grow. Thankfully he recovered very nicely from it. By the end of July he was well enough to come home for the first time in 302 days. Our longest hospital stay. Just in time for his 2nd birthday to be spent at home with all of our friends and family.

We left the hospital not knowing where he would end up, what he would be able to do, the only answer we had was only time will tell. Over the course of the past 2 years we have had a few hospital stays mainly for illness. But Sir’Savion has gotten healthier and stronger than he has ever been. He learned how to hold his head up again, he learned how to sit up, to pull up to stand, to crawl, to scoot on his butt. He now uses a walker to get around and hopefully soon will be able to walk completely unassisted. His heart function is great, and his blood pressure is very well controlled. He absolutely loves his big brother and sister, to be outside, to go for walks, to laugh. He is his happy, goofy, silly own little self. He has the best personality with the cutest face and the biggest loving eyes. He has been off the vent for the past year, and we are working toward getting his trach removed, ( hopefully this summer). However he will be having another cranial surgery in the future which is in his best interest. I’m sure he will do fantastic with that too. He is the strongest and the bravest person that I know. He is my rock, and one day at a time is living with and fighting against Generalized Arterial Calcification of Infancy.