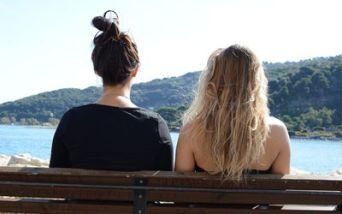 The story of Laura and Martina and a rare disease called GACI with two very different outcomes. The two sisters are affected by the same rare disease: one risked dying immediately after birth and lives in a wheelchair; the other has only slight skeletal problems.  Laura and Martina are two girls, respectively 21 and 29 years old, whose lives have been marked, albeit in very different ways, by a very rare disease, generalized arterial calcification of infancy, also known as GACI. Sisters linked by a special relationship, they lived their childhood and adolescence in radically opposite ways since Martina suffers from a psychomotor deficit that forced her into a wheelchair, while Laura’s studies in languages led her to travel to China and Korea: two similar but at the same time different lives, just as the severity of the manifestations of a complex disease such as GACI can be very different.

“For most of the time, Martina’s pregnancy was completely normal , in every respect,” recalls the mother of the two girls. “Even if during an ultrasound examination something anomalous was noticed, certainly no one suspected a situation like the one that then occurred.” In fact, two months before giving birth, Martina’s mother felt unwell, and she was hospitalized for a check-up at the IRCCS Burlo Garofolo in Trieste, during which it became clearer that the little girl was suffering from a cardiological problem. “The doctors who were following me met to understand how to proceed and, at the end of a consultation extended to the gynecologist, cardiologist and neonatologist,they opted for caesarean delivery,” she continues. “It all happened within twenty-four hours: Martina was born prematurely and was immediately admitted to the neonatology ward, where she lived the first six months of her life.”

The doctors assumed that Martina had already had a first heart failure in utero, and at her birth, they found that her heart appeared dilated and that she was suffering from very serious hypertension. “They told us that Martina would probably die within a week,” the mother says,  “but then, luckily, she started to improve, and after a while, it was understood that the origin of her problems was GACI, a rare genetic disease that causes calcification of the body’s arteries.” Martina faced two serious episodes of heart failure and suffered severe brain damage that caused her to be psychomotor retarded, forcing her to live in a wheelchair; this made an intense rehabilitation program and accurate checks necessary for her, which were subsequently also extended to her younger sister, born eight years later.

“Up until the age of 13, I didn’t know much about Martina’s illness,” explains Laura.  “I knew that at birth something had gone wrong, and when the other children asked me what my sister had, I would simply reply that she had had a heart attack as a baby and that she was unable to walk.  I did not imagine that I was affected like her by GACI.”  At the time of her birth, Laura showed signs of a very mild form of the disease, without the hypertensive episodes that had struck Martina, and therefore, hers was a childhood like that of all the other children.  As a child, she underwent a series of cardiological checks and only became aware of having GACI when the doctors observed that I didn’t grow in height,” says Laura.  “It was thought that it could be a hormonal problem, but the tests did not show any anomaly in this respect.  The doctors then hypothesized that the problem was due to the same rare disease that my sister had and that I had been suffering from since birth, unbeknown to my parents.”

In Laura’s case, the diagnosis was also supported by the pain in her knees and legs that the girl complained of for a period of adolescence.  In fact, the form of GACI from which Laura and Martina are affected is caused by mutations in the ENPP1 gene, which can also cause a variant of hypophosphatemic rickets called Autosomal Recessive Hypophosphatemic Rickets Type 2 (ARHR2), characterized by short stature and bone and joint problems.  “I learned about GACI at a period of my life in which I suffered psychologically from being shorter than my classmates,” recalls the girl.  “However, knowing that I had this condition didn’t upset me excessively, it was actually a revelation that allowed me to ‘fix some pieces of the puzzle’ and made everything clearer.”

Laura has never felt limited in her daily activities and has always been able to do the things she liked, starting with the study of oriental languages, which prompted her to travel around the world.  “I attended Linguistics High School, and in my first year, the possibility of traveling to China arose,” recalls Laura, thinking back to the moments of apprehension generated in the family at the prospect of such a long journey, which meant taking a plane [the fears that the sudden change in pressure could cause health problems were set aside after a consultation with Dr. Irene Bruno of the IRCCS Burlo Garofolo, who has always followed Laura and Martina, Editor’s note].  “I have walked on the Great Wall, I have visited extraordinary places, and having chosen to study Chinese and Korean, I have returned to China several times, and I have recently returned from Korea.”  Laura loves traveling, and on numerous occasions, she was able to travel with Martina. “Due to pressure issues, Martina can’t take the plane, but with her and my parents, I’ve still made many trips and had good experiences.”

Life together with Martina has allowed Laura to get to know many people with various rare diseases and different degrees of disability.  “In this sense, diversity has always been at home for me,” Laura tells us. “In life we ​​all face periods of difficulty, and I admit that as a child, there were moments in which I was jealous of the family situation of some of my friends, which was much easier and more straightforward than mine. But I love Martina, and even if I’m aware that we won’t be able to have a relationship like the other sisters, I’ve learned to take care of her, and I’ve received a lot from her: there’s a special bond between us.”

A diagnosis of GACI can be frightening, and being able to talk to someone who has gone through the experience can make navigating all the new information and choices less intimidating.  If you are a newly diagnosed family and would like us to connect you with someone who has been in your shoes, please use the Contact Us button below.