Generalized Arterial Calcification of Infancy or GACI (pronounced GACKEE) is a rare genetic condition inherited through an autosomal recessive inheritance pattern. The affected gene can be passed from generation to generation. It is possible for people to carry the gene and not exhibit any symptoms. These people are referred to as healthy or unaffected carriers.

In 2003 it was discovered that the ENPP1 gene was the cause of almost two-thirds of cases of GACI. The ENPP1 gene is responsible for encoding an enzyme that is necessary to make pyrophosphate. Without this enzyme, low pyrophosphate levels allow calcification to develop in the arteries. This is referred to as ENPP1 Deficiency.  Patients with ENPP1 Deficiency who survive GACI in infancy often go on to develop a rare form of rickets called Autosomal Recessive Hypophosphatemic Rickets Type 2 (ARHR2).

The ABCC6 gene was identified as a cause of GACI in 2008. Mutations in the ABCC6 gene are also associated with low levels of pyrophosphate in the body.  This is referred to as ABCC6 Deficiency.   Patients with ABCC6 Deficiency gene who survive GACI in infancy can go on to develop a condition known as PXE (Pseudoxanthoma Elasticum) as they get older.

There are rare cases where patients with GACI do not have mutations in either the ENPP1 or ABCC6 gene. Therefore it is thought that there may still be at least one other unknown gene that could be responsible for causing GACI in patients, or that mutations in one of the two known genes were missed by the sequencing technology.

Pyrophosphate (PPi) is important in controlling calcification and other mineralization in the body.

The ABCC6 gene provides instructions for making a protein called MRP6 (ABCC6 protein). Mutations in the ABCC6 gene lead to non-functional or absent MRP6 protein. It is thought that the lack of MRP6 protein impedes the release of ATP from cells and as a result pyrophosphate production is limited.

Individuals with GACI and parents of children with GACI are encouraged to seek genetic counseling to explain the likelihood of GACI recurring in their families or to discuss having other family members tested for GACI. 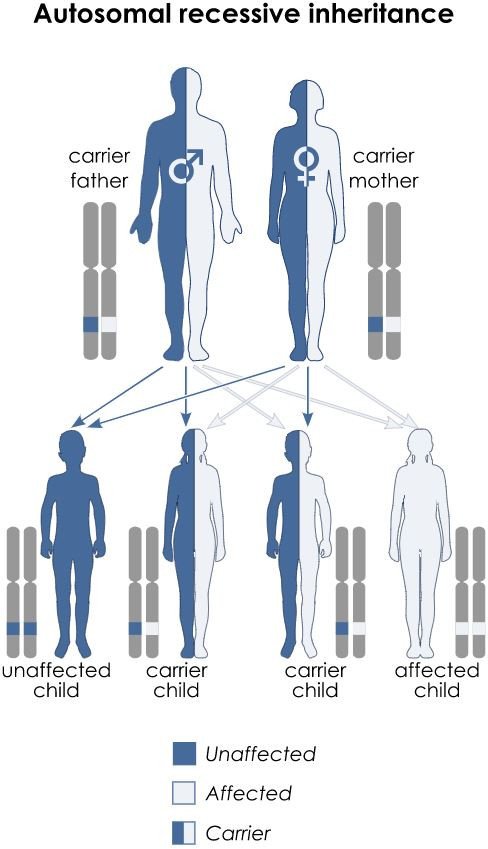 Photo Credit: Kashmiri, based on earlier work by Domaina

GACI is inherited in an autosomal recessive pattern.  This means that people affected by GACI inherit two mutated genes in each cell, one mutated gene from each parent.  As a result, both copies of the gene in each cell have mutations.

Parents of an individual with an autosomal recessive condition are known as unaffected carriers.  This means that each parent has one copy of the mutated gene in each cell and one copy of the gene that is not mutated.

Unaffected carriers typically do not show any signs or symptoms of the conditions.

The two genes known to cause GACI are ENPP1 and ABCC6. There are some cases where no genetic cause has yet been found.

We know that medical costs can often be prohibitive, and genetic testing is no exception. For patients exhibiting symptoms of GACI or ARHR2, Inozyme Pharma is providing a no-cost genetic testing program as part of a research study. Here is a link to their consent form, the last page of which outlines qualifying criteria.  Please email us at info@gaciglobal.org if you would like more information.